Thanks to the financial support of the National Commission for the Knowledge and use of Biodiversity (CONABIO), a floristic inventory was conducted at  Rancho El Aribabi.  This study includes  over a thousand specimens, collected at the ranch by the University of Sonora, and documents a great diversity of plants (Sánchez, 2011).

The flora of the ranch is supported with the curatorial records  of 1054 exemplary botanists deposited in USON Herbarium, which will be available for consultation through the portal of the national system of information on Biodiversidad (SNIB) of CONABIO.

The flora of the rancho El Aribabi (Appendix 1) documents a total of 453 taxa of vascular plants belonging to 87 families and 303 genera. The families with highest number of taxa are Asteraceae (65), Poaceae (41), Leguminosae (37), Euphorbiaceae (18), Malvaceae (12), Cactaceae (15) and 10 ferns. The floristic composition of the ranch can be seen in Table 2. Only three species of flora (Carnegiea gigantea, Juglans major and Amoreuxia palmatifida) are designated as at risk within the Norma Oficial Mexicana NOM-059-2010; however, some species such as Lilaeopsis schaffneriana recurva is designated as endangered in the United States. Species not native (29) represent about 6% of the flora and of these only 6 have invasive behavior, of which the pink grass (Melinis repens) represents a serious ecological threat.  However, the aquatic plant known as watercress (Nasturtium officinale) is potentially invasive in the Cocóspera River, while Johnson grass (Sorghum halepense) has frequently been found elsewhere in the blue mountains.

The great floristic diversity of Rancho El Aribabi is the result of the different ecosystems that come together at the ranch in such a way that we can find riparian forest, Sonoran Desert (with elements of the eastern limit of the Highlands of Arizona), semi-desert grassland, Madrean forest represented by Oak and Pine-oak (Martinez-Yrizar, 2009) woodlands. 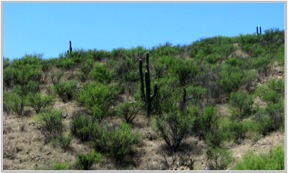 This represents the lowest portion of the Madrean Forest and is located in the northeast corner of the ranch within the secion A, towards the higher parts (about 1350 meters above sea level) where the Arroyo Las Palomas (Figure 70) is located. Oak Forest occurs on the northern slopes and consists of four species Emory Oak (Quercus emoryi), Arizona White Oak (Q. arizonica), Mexican Blue Oak (Q. oblongifolia) and Toumey Oak (Q. toumeyi). Other trees are also present that are  characteristic of the Northern grasslands such as Alligator Juniper (Juniperus deppeana), Rose-fruited Juniper (Juniperus coahuilensis) and Arizona Madrone (Arbutus arizonica). 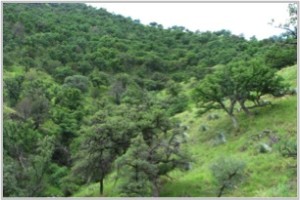 In the vertical  rocky walls of Las Cañadas (Figure 71) near the stream we can find various species of cacti known as pincushion, beehive, or hedgehog cacti (Mammillaria spp., Coryphantha recurvata, Coryphantha vivipara and Echinocereus santaritensis). In the margins of slopes and streams grows Ash (Fraxinus gooddingii) and other shrubs of showy bloom including Philadelphus microphyllus and Fendlera rupicola. Several species of ferns are present in this canyon, mainly of the genus Adiantum, Cheilanthes, Bommeria and Pellaea.

Figure 71. Diverse plants on the vertical walls of a canada of Arroyo Las Palomas.

This is an area of  usually rocky soil and high vertical walls (Figure 72), which hinders access to livestock and aids it’s preservation. Las Palomas Brooks, El Cajoncito, Los Amorosos, and Los Huerigos were some areas from which these plants were collected during the project. 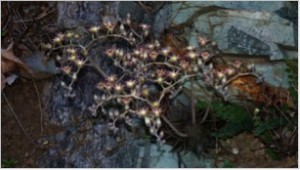 Figure 72. Graptopetalum rusbyi, a crassula found on the nearly vertical rocky walls of canyons at Rancho El Aribabi, the image plant blooms in late April on the Huerigos Brook.

It is the largest section of Madrean forest on the ranch which didn’t have any collections taken during this project. It is located on the eastern boundary of the fractions B and C of the ranch where it reaches elevations of around 2000 meters above sea level. The northern slope of Cerro Azul is located in the southeast corner, and according to the authors for this locality records would be highly likely to find, especially in the southeast corner of the ranch (sector C), some species that have not been registered at Rancho Aribabi; for example are, Pinus arizonica, Quercus hypoleucoides, q. viminea, Holodiscus discolor, Silene laciniata var.. greggii, Solidago wrightii var.. Adenophora, Tagetes patula, Lobelia anatina, Vicia subsp. pulchella. pulchella, Brickellia eupatorioides var.. chlorolepis, Stevia var. serrata. serrata, Eryngium lemmoni, among others. The possible discovery of these species, would significantly increase flora at Aribabi, so it is highly recommended continuing the work of collecting specimens in the forest of pine-oak, which is located at the southeast corner of sector C of the ranch.

Aribabi Ranch is located in the basin of the Cocóspera River which flows from northeast to southwest on the eastern limit of the (fracción=section, area, etc) A, covering a little more than 4 km ride and presenting a river forest in excellent condition (Figure 73). 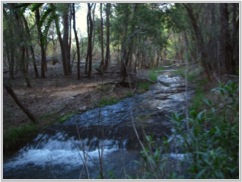 We can also find extensive grasslands (Figure 74), from the west in the lower parts to the highest elevations in the East, where extensive areas of grassland are mixed with the Oak. So far, on the Ranch we have identified 41 species of different genera grasses, the most important include species of Aristida, Bothriochloa, Bouteloua, Erioneuron, Hilaria, Muhlenbergia, Setaria, as well as a kind of native maize of the genus Tripsacum.

Figure 74. The base of the Blue Mountains towards the Valley of Cocóspera, you can see the hills with natural grassland of Rancho El Aribabi.

In grasslands, within the zone that transitions to the Oaks are a mixture of Microphyllscrubland  with scrub Rosetofilo that includes some types of thorny scrub at the foot of the hill as chilicote (Erythrina flabelliformis), Feather Tree (Lysiloma watsonii), sotol (Yucca baccata), Bear Grass (Nolina microcarpa), Palmer’s Agave (Agave palmeri), Schott’s Agave (Agave schottii) and  Desert Spoon (Dasylirion wheeleri); in this grassland area it is common to find Netleaf Hackberry (Celtis reticulata) and Desert Willow (Chilopsis linearis) next to the slopes and streams.

The great biodiversity  preservation of Rancho El Aribabi and the degree of knowledge of the flora and fauna throuout as a result, supported it’s nomination as a priority area for conservation in Mexico (published in the official journal of the Federation on December 28, 2007). Subsequently, due to the need to preserve ecosystems and as a measure for the preservation of endangered species like the jaguar and ocelot, as well as to protect its vast biological diversity, Rancho El Aribabi was declared as a Natural Protected Private Area within the system of natural reserves of the National Commission of Natural Protected Areas (CONANP-250/2011 certified)thus becoming a great example not only for Sonora and Mexico, but also for the world (Sánchez, 2011).

List of vascular plants of the Rancho El Aribabi, municipality of Imuris, Sonora. The listing is based on herbarium specimens deposited in USON and ARIZ herbaria, as well as observations in field of well known species. Non-native species are marked with an asterisk (*).